Log in Register
What's new Search
You are using an out of date browser. It may not display this or other websites correctly.
You should upgrade or use an alternative browser.

I have just recently gotten the Kingston V+ 128GB, SNVP325-S2/128GB. I have used this to replace the Kingston V Gen2 in my desktop. I know some people have been wondering about the performance difference between the two drives, so I will share my experiences.

Right off of the bat I was/am a little concerned. When I ran AS SSD I got very low scores, worse than I got with the V. I have run and rerun the benchmark and the best result I got was this:

Which if you compare it to the results from the V series:

My write speeds are lower right across the board and this should not be. Now this is with a fresh install of Win 7 with only a few programs installed. By all means it should be faster. Then I ran HD Tach and found something interesting. If you look below you will see that it is generally good, except it has two large drops in performance.

I also ran HD tune and this same sort of pattern appeared there as well.

I'm not sure what exactly is happening and maybe someone can give me an idea of what is going on. So after that I was wondering what would happen with CrystalDiskMark. Now as you can see it shows a much different story compared to AS SSD.

Now compared to the V Gen2 you can see that the sequential read is a little bit slower but 512k and 4k reads are much faster.

Now when you look at writes there is a significant improvement right across the board.

Now my real world tests also have shown mostly good improvements, although copying from the device is not quite as good. I'm sure this has to do with me getting a little lower Seq. reads. This is most notable with the large file transfer which is a full ten seconds slower. All of the file transfer tests are the average of 3 tests. The logon time was 5 separate tests with full reboots, I dropped the highest and lowest and then took the average of the 3 remaining.

In seconds lower is better

In seconds lower is better

File Transfers to Itself

In seconds, lower is better

So as you can see even though there seems to be a few strange things going on with AS SSD, and the two very low dips in minium read, overall the V+ certainly outperforms the older and cheaper V Gen2.

Now is it worth the extra money? There is currently a $66 premium to the V+ on NCIX and I would have to say that I do believe it is worth that extra money. When you look at the 4k write speeds you can see why I say that. Also there is the fact that it does just feel faster than the V Gen2. As for my V Gen2 I have put that into my new Asus U30JC notebook and will be doing some benches on that to see what kind of a difference it makes.

Thanks for taking the time to share this with us.
I really like your bar graphs, I guess there is an app somewhere that allows your to quickly make bar graphs that look PRO.

Your 4k specs are better than my Vertex 120GB, the V+ is an enthusiast drive, where your V-series was an average drive. Guess it comes to the point where that when you cross the "enthusiast line" you're paying a lot more, but the "extra performance" curve is not proportional with the additional price over the "average product".

Let us know how the laptop is doing with the V-series SSD!
K

Here is what I got with my V series for comparison. 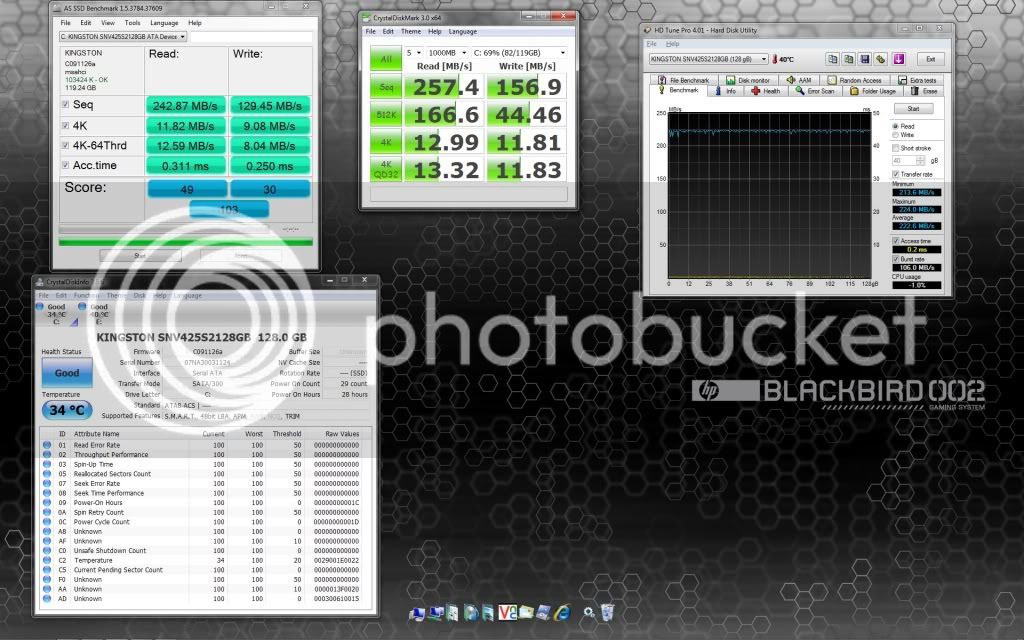 That was good perf. from a SSDNOW V-series! Looks like the 4k reads/writes are on par with Indilinx-based SSDs...
You must log in or register to reply here.